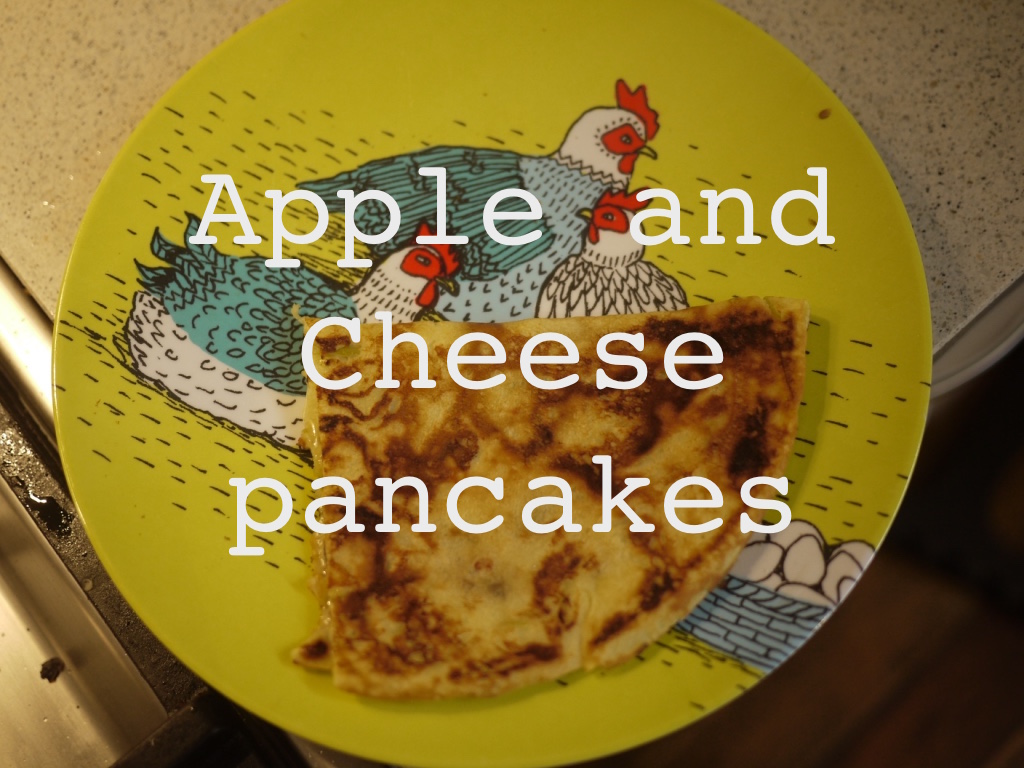 Not the best photo but there were mitigating circumstances – I had a migraine and could really only see out of one eye.  Props to Fiona for the awesome chook plate.

In the midst of a (slightly) drug-fuelled fog, while trying to get my baby to eat all the lunch, today I created something great.  She had already eaten a good piece of fish – with lemon and pepper, thank you – and half an orange when I decided to make some apple pikelets, just to round lunch out.  I was in migraine town but by that stage the painkillers had set in so I was just slowly, slightly blindly, pootling about.

I remembered that the last time I’d made pikelets Una had been a bit “meh” about the texture so I though rather than make pikelets I’d make something more like a crepe batter with grated apple in it.  This suited me because – my two American readers are about to zap me with lasers from their eyes – I don’t really like American-style fluffy pancakes*.  I made a few, decided one of them was for me, and then thought, “I’ll just put some cheese in here.”  Good call Kate, good call.

In the meantime, if you’ve ever thought, “should I make a pancake on my sandwich press, just to see what will happen?” you should because it turns into a kind of crispy wafer type thing and doesn’t stick or any of the horrible cleaning-burnt-on-shit-off-the-plate business that I was worried about.  Obviously not worried enough not to do it, but you know.

Anyway – I didn’t do any measuring here (did I mention the drug haze) but it’s a basic idea, you guys are clever, you’ve got it.  The classic cheese and apple pairing is of course cheddar, but use whatever you like.  Within reason. If you put gouda in there I’m gonna look at you skewiff, but I guess whatever floats your boat.

This only makes a few pancakes, if you want make more just double the recipe, or if you have a crepe recipe that you like (I do, I’ll share it with you one time) just use that and put grated apple in it

Whisk the egg, flour, and half the milk together until smooth.  Add the grated apple and the oil then thin the mixture with the rest of the milk – until you have your desired consistency.

Heat a well seasoned or non-stick pan over a medium heat.  Spoon some of the mixture in and smooth the batter across the pan with the back of the spoon (note, I haven’t put any fat in the pan because I added oil to the mixture.  Follow your heart in this matter).  Cook on one side until the top side is no longer liquid, then flip and cook for 30 seconds to a minute more.  Flip back to the first side, add the cheese and fold the pancake in half.  Cook until the cheese is melty.  Scoff.  Don’t give it to your baby, they’re not really meant to have as much salt as goes into cheese (I won’t judge you if you do though).

_________________________________
*Don’t even get me started on blueberries.  Or burgers.  I’ve just been riding out this Australian “American Food” craze, waiting for it to end.  I heard a rumour a while ago that the next big thing in Melbourne was going to be Northern Chinese cuisine, I could get behind that.  It doesn’t seen to be happening though.  There was also talk of an Italian resurgence.  I’m just saying, polenta, people, polenta.  Not polenta people though.